It’s Time to Renew the Violence Against Women Act

Twenty-six years ago, in 1994, Congress officially recognized violence against women as a national crisis and took steps to combat gender violence on a national level by passing the Violence Against Women Act (VAWA).

VAWA allocated resources to train and educate law enforcement, investigate and prosecute violent crimes against women, and support survivors and their families. Since its original passage, VAWA has been renewed several times with bipartisan support. In 2013, it was updated to improve services for victims of domestic violence, sexual assault, dating violence, and stalking, and added more comprehensive resources for Native American women, immigrants, members of the LGBTQ community, college students, and public housing residents.

Unfortunately, VAWA was allowed to expire in December 2018, removing vital protections and services for victims of gender violence. Its reauthorization was passed by the House of Representatives in 2019, but the U.S. Senate has refused to move the legislation forward, prompting outrage from around the country.

This is an urgent matter, particularly since COVID-19 has heightened the threat of domestic violence for many women. Increased stress, cramped living conditions, and disruptions in community support systems can fuel abusive behavior. Stay-at-home orders have forced some women to shelter in place with abusive partners. Many cities in the U.S. and around the world have confirmed an increased number of reports and police calls related to gender-based violence during the pandemic.

Violence against women can happen anywhere. CWLC remains dedicated to maintaining and improving resources available to survivors and their families. We are leading lawsuits that hold schools accountable for enabling campus sexual assault, we continue to provide amicus support for policies affecting survivors of domestic violence, and we have updated our guide regarding restraining orders with information relevant to changes in the court process brought on by COVID-19.

If you or someone you know needs help accessing a domestic violence restraining order or other legal support, please contact us at cwlc@cwlc.org. 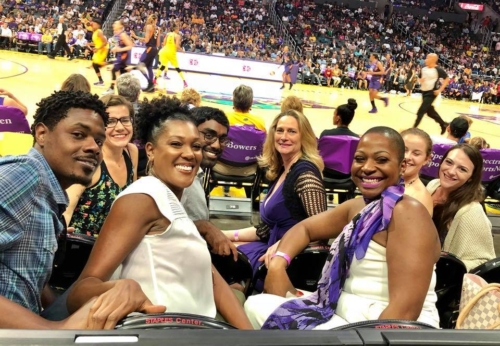 LA Sparks We Are Women Event